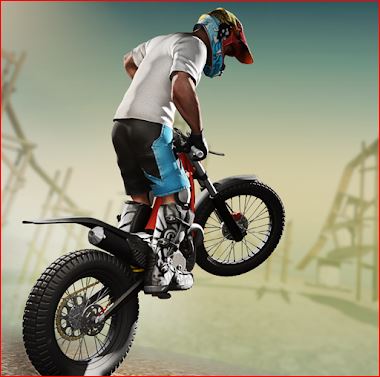 Trial Xtreme 4 is the next version in the Trial Xtreme speed racing series, released by Deemedya, which has stormed on many mobile platforms. Currently, this game has the latest version for Android devices with many attractive improvements.

Trial Xtreme 4 still inherits many outstanding features in version 3, but this time the manufacturer has created many significant turning points, raising its ” darling” to a new level, becoming the center of discussion on many online forums. With over 70 million downloads for the whole series, and version 4 after a while of the launch is more than 5 million downloads. It can be said that Trial Xtreme is the best off-road motorcycle racing game on mobile, with vivid graphics, real physics mechanics and intuitive control system, giving players a great experience when lost into dangerous races.

Trial Xtreme 4 is a new racing game on Google Play, in which players must race motorcycles on rugged terrain, distributed full of obstacles. Your task is to jump over, pierce, or dodge them to reach the destination safely.

The options in the main menu of Trial Xtreme 4 are relatively easy to see, scientifically arranged, allowing you to choose the type of racing car, customize the appearance of the driver, and participate in one of 3 main racing modes. Besides, you can view the in-game achievement system, basic settings, and log in the game with your Facebook account to race with friends in multiplayer mode.

Customization options for riders include hats insurance, clothing, pants, shoes … to create a unique style for riders. Upgrading the car and customizing the rider will cost you a lot of money. Earn money from winning races, or buying in-game IAP packages. These IAP packages range from $ 4.99 (for 35,000 gold) to $ 109.99 (1 million gold). These packages are quite valuable but do not worry. In Trial Xtreme 4 version (MOD, Unlocked), you can unlock all upgrades without using gold to do it. With this version, you can upgrade the car to your liking, regardless of price.

Duel Mode allows racing against one opponent and rewards up to 250,000 gold if you win.

Participate in tournaments to race in 8 different competitions, the rewards also change depending on the race, and the racing time depends on the match. Some tournaments require a subscription fee (using in-game money) and others are free. When racing with other competitors, you will have the opportunity to change your rank. The higher the rank, the greater the reward, by the end of the tournament.

This is the basic racing mode in Trial Xtreme 4 with the Play button on the main menu. You can compete with other rivals to earn gold, challenge your Facebook friends, or simply race for fun. This game mode consists of 63 levels, unlocked gradually according to your playing progress, or unlocked instantly when buying IAP packages.

The game control mechanism Trial Xtreme 4 is quite common and homogeneous in the game, shown by being done right on the screen. You can press the accelerator, brake, and perform other driving techniques. Players can choose the control mode to tilt the device or press the button on the screen to control the car on the road – head-down or head-lift …

The racing environment in Trial Xtreme 4 is quite diverse, from industrial parks, tundra to another rugged terrain. You will face a lot of obstacles, forcing the car to jump, crashing through obstacles … to reach the destination while ensuring the safety of the car and the driver.

The main feature of the game

Racing high displacement on a complex terrain with many other competitors, domestic and international, with different levels. Winning will help you earn money and valuable prizes to upgrade your immortal “steed”!

Do you want to make breakthroughs in your racing career? Do not ignore the 2-person racing mode to compete directly with a new opponent, of course, the prize money will double compared to the regular tournament.

Realistic 3D graphics make you feel like being on the track, experience the mortal race with many other silk riders.

Prove you are the top high-displacement motorbike racer, to receive bonuses in the race with strong opponents.

Upgrade racing comprehensively, from operability, speed to the appearance of the vehicle. Equip the vehicle with many impressive items and match its bravery!

Certainly, Trial Xtreme 4 will bring you blazing races, and a series of unexpected challenges. Quickly download file mod apk the game to your computer and prove your talent in the Arena arena!

Donwload Pepi House (MOD, Unlocked) for Android
General introduced Are you looking for a wholesome game for kids? A game that you can play with the whole family? A game where you can introduce basic household chores to your children, and also educate them through doing those chores in a fun way. Come to Pepi House, a PC game for families that […]

Grand Gangster: Vegas Mafia City (MOD, Unlimited Money)
Have you ever played a gangster game? Do you want to play a crime simulator with exciting new content? Grand Gangster gives you a really fun experience with a crime simulator. You will be an ambitious criminal, and you are looking to create a powerful gangster organization. To do that, you must learn to survive […]

GTA: Chinatown Wars (MOD, Unlimited Money/Ammo) + OBB
GTA: Chinatown Wars is an extremely thrilling action playground, following up on the series of popular GTA street looting games. The game comes from the publisher Rockstar Games. In this unique version, players will have to participate in dramatic chases. You will complete challenging missions in the game. Similar to its brothers like Grand Theft […]

GTA 5: Los Angeles Crimes 1.5.4 (MOD, Unlimited Money)
GTA 5: Los Angeles Crimes – the continuation of the acclaimed series of criminal action games that began to appear on Android. In it, the player will again be able to plunge into the atmosphere of a large city and become the most influential criminal. The user will have a huge virtual world with its own […]

GTA 3 – Grand Theft Auto III 1.8 (MOD, Money/Ammo/Invincible)
If you’re an action gamer and you like thrills, do not miss GTA 3. This game will bring you unprecedented excitement. In GTA 3, you will be a racer, terrorist, and fight with other gangs. You will experience new and unprecedented feelings. The following article will give you specific information about this game. GTA 3 […]

GTA 5 APK Download
Grand Theft Auto (GTA) is a familiar game for many players. It may have been associated with our childhood. The game will remind you about the adventures in the city, and fight the criminals or the police. GTA players have gone through many different versions of this fascinating game. GTA 5 is a new version, […]

Download GTA: Vice City (MOD, Money/Ammo/No Reload) for Android
If you’re an action gamer, do not miss GTA: Vice City. This game will bring you unprecedented excitement. In GTA: Vice City, the player is a racer that robs insanely. The following article will provide you with specific information for this game. GTA: Vice City is an action role-playing game released by Rockstar Games. This […]

Download Castle Clash: Brave Squads for Android
Discover the interesting game Castle Clash is an interesting and engaging strategy game, which mixes military management style. Castle Clash is staged in an epic style with fierce battles. Besides, it happens at a fairly fast pace. A gamer will manage a mighty army and build barracks. You own the elite soldiers with melee skills […]